PARIS, FRANCE August 1, 2017, Paris 2018 and the International Gay & Lesbian Football Association (IGLFA) have partnered to host the 2018 IGLFA World Championship XXIII at the Gay Games 10 in Paris 4 through 12 August, 2018. The Women’s and Men’s soccer tournaments are organized by the Football Club Paris Arc-En-Ciel (FCPAEC) and Panamboyz United, with the support of the French Football Federation (FFF). This partnership will facilitate the planning and implementing of the matches along with all the events affiliated with the soccer tournament. Paris 2018 and IGLFA will promote the 2018 IGLFA World Championship XXIII at the Gay Games 10 to the hundreds of clubs and members all over the world to assure every athlete attending has the best experience ever.

An estimated 800 players are expected to participate in the soccer tournament, representing dozens of countries around the world. The IGLFA World Championship is part of the Gay Games which will bring thousands of other athletes to Paris to compete in such sports as aquatics, track & field, volleyball, softball and more, in what is expected to be an amazing competition. IGLFA will be visiting Paris in late October, 2017 to go over details and preparations for what is expected to be one of the best Gay Games ever held in one of the world’s most popular destinations. Sports are just one part of the games. Paris 2018 is planning conferences, cultural events and festivities all over the city supporting LGBTIQA+ issues, artists and accomplishments.

Registration for the Gay Games is now open on Paris2018.com
Spots are limited!  Register today!

Paris 2018 is the 10th edition of the Gay Games, the largest international sporting and cultural event open to all.   From 4 to 12 August 2018, thousands of participants from 70 countries are expected for this event which not only includes sports but cultural events and festivals in Paris and surrounding areas, with a programmed 36 sporting events, 14 cultural activities and an academic conference at the Paris city hall.  Paris 2018 – Gay Games 10 is organized by a team of volunteers, with the support of the city of Paris, the Ile-de-France region and the Ministry of Sports, as well as the 36 national sporting associations and notably in partnership with The Gay and Lesbian Sporting Federation, the LGBT Center of Paris Ile-de-France, the Inter-LGBT, the Autre Cercle, the LICRA and the FAGE Student Federation.

The International Gay & Lesbian Football Association (IGLFA) was founded in 1992 in order to help promote and foster the growth of LGTBQ football worldwide. Since IGLFA’s creation, more than 100 teams/clubs representing over 30 countries have joined and participated at IGLFA competitions. Each of these teams/clubs have played a vital role in helping IGLFA accomplish its goals and uphold its mission. In recent years the IGLFA has shifted its focus from organizing an annual IGLFA World Championship, to one which provides assistance to organizing boards of national and international tournaments and events. 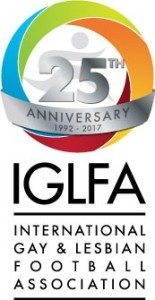